Honored with the revered title of “Steinway Artist”, Vincent LARDERET has attracted international recognition for the exceptional intensity of his performances and his highly acclaimed recordings. Praised as an “impressive pianist”(MusicWeb International, UK) for his “very lyrical playing” (Crescendo Magazine, Belgium) and his “multi-timbred” sound (Fanfare, USA), he “makes the piano equal to an orchestra”(Classica, France) with a wide range of “fascinating pianistic colors” (PIANO News, Germany). His very personal and deeply inspired interpretations are often compared to the piano legends such as Michelangeli, Pollini, Zimerman and Argerich. The MUSICA magazine in Italy hailed « the ghost of Claudio Arrau” while the Toronto Star in Canada described : “his playing is remarkable for its ease as well as style. Larderet overcomes with panache”.

Nominated for the « International Classical Music Awards » and “Classical Revelation” by Adami winner at MIDEM in Cannes, he is considered as one of the leading French pianists of his generation. Vincent Larderet’s eclectic repertoire stretches from Scarlatti to Boulez, who played an important role in the romantic period, French music and during the 20th century. He also ardently favors lesser-performed composers such as Berg, Scriabin, Falla, Schmitt and Szymanowski. In 2007 he performed a series of recitals dedicated to Beethoven and especially distinguished himself with the « Hammerklavier » Opus 106 and Opus 111 Sonatas. He also participated in the complete live recording of Beethoven’s 32 Sonatas, notably alongside Stephen Kovacevich for the prestigious DVD set released by Piano Passion. Internationally renowned as a Ravel specialist, he worked in Paris with Carlos Cebro who passed on to him the Ravel tradition of Vlado Perlemuter and studied Ravel’s works on Perlemuter’s personal scores annotated during his collaboration with the composer. Mr. Larderet is also used to performing both the 2 Ravel Concertos during the same concert. He perfected his art at Lübeck’s Musikhochschule in Germany with the famous pianist Bruno-Leonardo Gelber. At the same time, Vincent was a prize-winner in several international piano competitions including Maria Canals in Barcelona, A.M.A. Calabria (in Italy under the jury Chairman of Lazar Berman) and Brest. He was also laureate of the “Orpheum Foundation for the Advancement of Young Soloists” in Switzerland. When it comes to shaping his interpretations, he is committed to a musicological approach and he studies and analyzes Music history.

His performances have been broadcasted on major radio and TV channels such as France 3, France 2, France Musique, Radio Classique, Radio Suisse Romande (Switzerland), Kultur Radio RBB, MDR, WDR, HR2 Kultur, BR-klassik (Germany), Radio Nacional d’Espanya, Civil Radio (Hungary), Radio Paris-La Paz (Bolivia), QBS (Quatar), Radio Canada, ABC Classic FM (Australia) and Radio New Zealand. His recordings released by ARS Produktion, NAXOS, Chandos and INTEGRAL Classic have achieved outstanding international critical acclaim as well as winning many prestigious Awards including the Classica “CHOC”, Diapason 5, Télérama 4 f, Resmusica “CLEF” (France), MusicWeb International “recording of the month” (UK), Klassik Heute “Empfehlung” (Germany), Crescendo Magazine “JOKER” (Belgium), RITMO 4 stars (Spain), MUSICA 5 stars (Italy) and Pizzicato “SUPERSONIC” (Luxembourg). He is also responsible for the major world premieres of Debussy, Ravel and Schmitt works. In 2019 he performed in the US the American Premiere of Ravel’s Daphnis et Chloé Suite. The SACD of the 2 Ravel Piano Concertos is praised by Fanfare among “the best recordings of the year”and “the only relevant performance which could exist alongside the reference recordings of Michelangeli and Zimerman”by Klassik Heute. His album devoted to Debussy stands out as one of the recording events of 2018 in tribute to the centenary of the composer’s death. A new Liszt 2 CD-Set released in 2020 by PIANO CLASSICS. Mr. Larderet is also the co-founder of the Piano au Musée Würth international festival in France which he managed as Artistic Director until 2017.

* Updated biographies should not be altered without permission. Please don’t use previous material and respect the form   (paragraph, quotations & italic) as indicated. 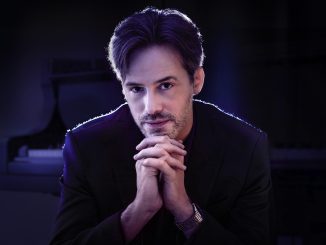 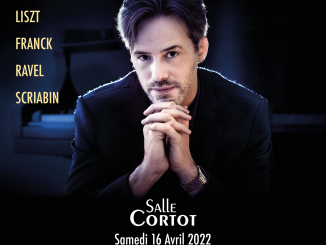 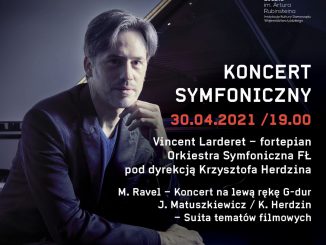 We can’t wait to hear again Vincent Larderet playing Ravel’s  left hand concerto with Filharmonia Lodzka under Krzysztof Herdzina on Friday april 30th at 19h!  To have tickets we invite you to follow the portal https://live.bilety24.pl to Friday’s streaming.

A lire au plus vite!