In 2015 the Arthur Rubinstein Philharmonic Orchestra (ARPO) celebrated its centennial anniversary. The inaugural concert of the Łódź Symphony Orchestra, given in the now-defunct Grand Theater on Konstantynowska Street (now Legionów Street) on February 17, 1915 is widely regarded as the founding event. The Łódź Symphony Orchestra was the second oldest (after the Warsaw Philharmonic) permanent symphonic ensemble in the territory of the former Russian Partition of Poland. The Orchestra’s enterprising members may be deemed the forefathers of the ARPO. During one of the concerts held to mark the centenary, the ARPO was awarded the Gloria Artis Golden Medal of Merit for Culture.

The ARPO has given the first Polish performances of many famous works. For instance on November 1, 1957, the Arthur Rubinstein Philharmonic Orchestra and Chorus were led by Henryk Czyż in Arthur Honegger’s “Le Roi David,” and on September 14, 1984 Maestro Andrzej Markowski conducted Witold Lutosławski’s Symphony no. 3, one year after its international premiere in New York.

The ARPO can also boast of several remarkable world premieres, such as Tadeusz Paciorkiewicz’s Piano Concerto, Tomasz Kiesewetter’s Symphony in B Flat Major and Symphony no. 2 in D Major, as well as Krzysztof Penderecki’s “Kaddish for soprano, tenor, reciter, male chorus and orchestra” led by Marek Pijarowski in August 2009 on the 65th anniversary of the of the liquidation of the Litzmannstadt Ghetto. “Musica festiva,” commissioned from Krzysztof Meyer for the ARPO’s centenary, features prominently in the Orchestra’s output, alongside commissions from Paweł Mykietyn, Artur Zagajewski, Andrzej Kwieciński, and Mikołaj Górecki. Some of the major achievements of the ARPO include recordings for Polish and international labels, especially those made under the baton of Henryk Czyż and Zdzisław Szostak. Notable ARPO recordings include Karol Szymanowski’s Symphony no. 2 and Ludwig van Beethoven’s Symphony no. 5. Among the latest productions, of particular interest is an album containing several compositions by Witold Lutosławski for voice and orchestra, which was nominated for the 2015 “Fryderyk” music award (the ARPO was led by Daniel Raiskin with choral direction by Dawid Ber).

The ARPO has toured extensively, visiting Austria, Belgium, the Netherlands, Germany, Norway, Switzerland, and Italy over the past several years. It has appeared at a number of prestigious venues, such as Tonhalle Zurich, Salle de Musique in La Chaux-de-Fonds, Queen Elisabeth Hall in Antwerp, Kölner Philharmonie, Verdi Hall at Milan Conservatory, and De Doelen Rotterdam. Those tours were prepared and led by Daniel Raiskin, who in the years 2008–2015 served initially as the ARPO’s Chief Conductor, and later Principal Conductor. During his tenure, the Orchestra considerably expanded its repertoire and gave many concerts to wide critical acclaim.

In February 2017, the Arthur Rubinstein Philharmonic Orchestra was led by Paweł Przytocki in a performance at the Golden Hall of the renowned Musikverein Vienna. The great success of that concert and the enthusiastic applause of the international audience provided inspiration for the Philharmonic’s management to appoint the conductor to the position of Artistic Director as of the 2017/2018 season.

The history of the Orchestra and the Philharmonic is presented at length in a richly illustrated centenary publication entitled “Filharmonia Łódzka. Spacer w przestrzeni, podróż w czasie” (“The Arthur Rubinstein Philharmonic: An excursion in space, a journey in time”). 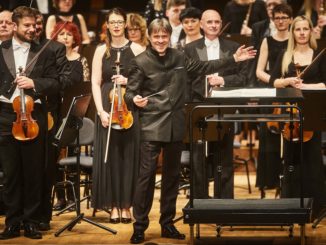 This year’s edition of the Fryderyk Festival was inaugurated on 8 March 2020 by the Classical Music Gala at the NOSPR Concer Hall in Katowice. Emil Młynarski: Violin Concertos performed by Piotr Pławner and the Artur Rubinstein Philharmonic Orchestra in Łódź under the direction of Paweł Przytocki – received the « Fryderyk » in the ‘Concert music’ category.