«THE piano duo of the younger generation» – Claudio Abbado

The story behind the Genova & Dimitrov piano duo sounds somewhat of a fairytale:
«Shortly before leaving to Korea for a solo piano competition, there was only one available rehearsal room at the Hanover University of Music and it was with two pianos. We spontaneously decided to start to play a Chopin Etude in sync. It was as if we had been given wings!», remember Genova and Dimitrov.

Only few months later, at the end of 1995, the two young musicians caused a matchless sensation by winning the four great international piano duo competitions in Munich („ARD“), Miami („Dranoff“), Tokyo, and in Caltanissetta („Bellini“) within the following two years.

Since then, Aglika Genova and Liuben Dimitrov are one of the most internationally sought-after piano duos. They have been celebrated both, by audiences and the press alike, performing on the most important concert and festival stages in several douzens of countries on all continents, such as the Library of Congress and the National Gallery in Washington, the Schleswig-Holstein, Rheingau, Ludwigsburg and Schwetzingen Festivals, the City Hall in Cape Town, the Herkulessaal Munich, the Liederhalle Stuttgart, the Gstaad Music Festival, and MDR Music Summer, at the Konzerthaus Berlin, the Beethovenhalle Bonn, the Cologne Philharmonic Hall, and the Passau European Music Weeks, as well as at the March Music Days Russe, the Varna Summer Festival, and the Sofia Music Weeks, the La Roque d’Antheron, the Al Bustan Music Festival Beirut, Casals Hall Tokyo, Poly Theatre Beijing, and Teatro Municipal Rio de Janeiro, at the Ravello Festival, the Woodstock Mozart Festival, the Festival Miami, and the Chopin Piano Festival Duszniki.

Since 2009, Genova & Dimitrov have been appointed Heads of Piano Duo Studies at the Hanover University of Music, the same one which they graduated from in the postgraduate class of Vladimir Krainev. They serve regularly as jurors of significant international competitions, such as the „ARD“ Music Competition in Munich, and were appointed Artistic Directors of the „Dranoff“ International Two Piano Competition in Miami. The Artists give master classes worldwide, both for piano solo and duo.

Aglika Genova and Liuben Dimitrov look back on an impressive discography – 15 CDs of the Duo have been released by «cpo» and «Gega New», and have been given constantly glowing reviews and awards by the international music media. Besides a number of world premiere recordings, such as Victor Babin’s Concerto, or the complete piano duo works of Dmitri Shostakovitch, Johann Christian Bach, Muzio Clementi, and Pantcho Vladigerov, also the Artists’ recordings with orchestra caused true sensation, such as the Concertos of Carl Czerny, Max Bruch, Bohuslav Martinu, Alfred Schnittke, Darius Milhaud, Francis Poulenc, Robert Casadesus, Felix Mendelssohn, and Bela Bartok. The albums with works by Gershwin, Copland, and Bernstein („America for Two“), Ravel („Favourite Flavors“), Arensky („Five Suites for Two Pianos“) or Liszt („Works for Two Pianos“) are enjoying great popularity in the music world.

In 2017, the Artists have been awarded the ECHO CLASSIC Prize for their CD «Bela Bartok & Victor Babin – Concertos for Two Pianos» («cpo»). In addition, the Duo has appeared in numerous international TV and Radio broadcasts. The portrayal TV documentary movie «Etude for Two Pianos» which has been produced and broadcasted by the BNT Bulgarian National Television in occasion of the 20th Birthday Anniversary, enjoys worldwide brisk interest.

The 2018/19 season schedule includes besides numerous recitals in Europe, Asia, and America, also a guest appearance with the Sofia Philharmonic Orchestra under Charles Dutoit. To the Artists’ season highlights belong also the studio recordings for the double CD with the Complete Piano Duo Oeuvre by Sergey Rachmaninoff („cpo“) at Radio WDR Cologne.

Genova and Dimitrov is one of the most internationally sought-after piano duos today. Already as a two-months-young ensemble, the Bulgarian-Greek descended pianists caused a sensation by winning the Grand Slam of piano duo competitions within only two years, namely the ARD (Munich), Dranoff (Miami), Tokyo (Japan) and Bellini (Sicily) competitions, a feat that has not been matched to this day. 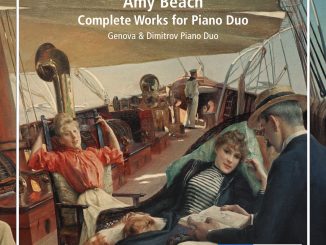 We are happy to introduce the new Genova & Dimitrov’s CD dedicated to Amy Beach’s Complete Works for Piano Duo!